India Post issued a set of two commemorative postage stamps to mark the baton’s entry into India as a herald to the Commonwealth Games 2010, one depicting the baton and the second, a proud Shera holding it with Delhi’s India Gate in the background.

The Queen’s baton has traveled through all the Commonwealth countries and landed in India on 25th June 2010, Friday through the Wagah Border with big celebrations, it will spend 100 days touring the country.
The Queen’s baton was launched on 29th October 2009 at Buckingham Palace in London, with Her Majesty Queen Elizabeth II handing the Baton to Her Excellency the President of India, Smt. Prathibha Devisingh Patil. Abhinav Bindra, the Olympic air rifle champion, began the Baton’s journey with a relay around the Queen Victoria Monument. It’s the longest relay of all the previous Commonwealth Games, and by the end, will have covered 190 thousand km across 71 nations. 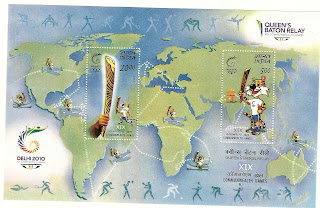 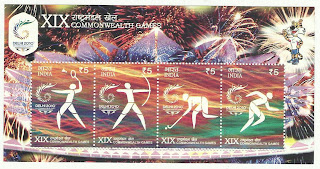